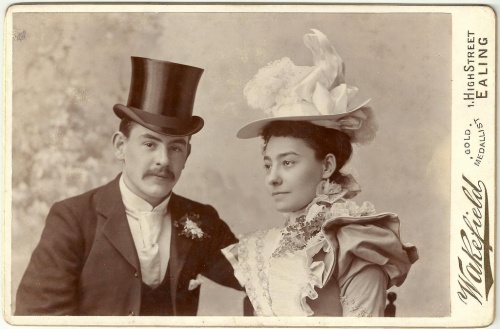 Spring always brings seasonal wedding fairs and June is a popular month for weddings. White bridal ensembles were fashionable within early-Victorian high society, for white garments (difficult to care for) signified elevated status and the colour carried Christian associations of innocence, purity and inferred virginity. This vogue evolved into a tradition following Queen Victoria’s wedding to Prince Albert in February 1840. Declining the customary heavy state robes, the young queen favoured a light toilette comprising a creamy-white Spitalfields silk dress with a deep Honiton lace flounce and white satin court train ornamented with orange-blossom, on her head a wreath of orange-blossom attached to a lace veil. Her twelve train-bearers also wore white dresses and the charming impression conveyed by the bevy of white-clad ladies was captured in the visual images and popular souvenirs widely circulated after the event.

With royal approval for picturesque white bridal wear, ladies’ magazines enthusiastically promoted the romantic image, publishing idealised images of demure brides in frothy white dresses and veils. All the trappings of the ‘white wedding’ also converged around this time: modernised churches for marriage ceremonies; bridal flowers including orange-blossom, myrtle, lily of the valley, stephanotis and jasmine; elaborate tiered white sugar paste wedding cakes; and ornate table settings festooned with flowers and greenery. The formal ‘white wedding’ was becoming established among the prosperous classes but for decades remained a distant vision for the working masses. For ordinary brides a prudent choice was fashionable day wear, a new acquisition or ‘best’ coloured dress that could be re-worn. Pale blue was also admired and early-Victorian bridal gowns with boned bodices were often fashioned from plain or ‘changeable’ blue silk, while lighter modes were popular for summer and country weddings, such as dainty cotton dresses printed with stripes or flowers.

During the 1860s wedding photography became widespread, most Victorian marriage photographs being indoor studio portraits depicting the newly-weds straight from the church. Typically the bride wore her best silk crinoline dress, surviving examples demonstrating the love of emerald green, magenta and other vibrant hues. Open-air wedding photographs in elegant settings date from the late-1860s onwards - impressive scenes depicting extravagant white weddings, the bride and attendants adorned in clouds of white silk or muslin, their heads crowned with orange blossom wreaths and lace or tulle veils. By the late 1860s bridal skirts displayed a pronounced backward sweep and soon overdresses were looped up and a bustle worn behind the waist to support the bouffant drapery, a style that prevailed until the mid-1870s.

From 1874/75, expressing the new cuirass line, wedding gowns grew narrower. Typically they extended into a long train, following fashion, but after trains disappeared from daywear c.1880, wedding gowns acquired separate trains, creating a dignified effect during the church procession. Brides fortunate to have a special white gown generally wore a veil, but those marrying in a coloured dress often favoured a stylish hat. During the early 1880s wedding dresses followed the prevailing slender silhouette but by 1884 a bustle projection was forming again behind the waist. Besides the desirable white gown, characteristic colours for bridal silks and velvets during the 1870s and 1880s were russets, rich browns and dark greens. By the late-Victorian era, as living standards for the expanding middle classes rose, more families could afford elements of the white wedding, such as veils and flowers, and various hybrid bridal styles emerged.

There was tremendous variety in bridal wear in the early 1900s, but the ‘white wedding’ was growing more popular throughout society. Edwardian wedding photographs often embody an air of grandeur, due to the exuberant styling of fashionable dress, especially the flounced sleeves and skirts and ornate wide-brimmed hats. Soft pastel shades and delicate fabrics such as chiffon and lace were well-suited to weddings, although more brides were now adopting a white dress and veil. In the years preceding the First World War the elaborate detailing of the early 1900s became outmoded and the fashionable line grew slender, more natural. Many brides of the 1910s wore white garments and enjoyed the full complement of flowers, fashionably-dressed bridesmaids and young flower girls and page boys. During the war (1914-18), as hemlines rose and grew wider, a white or coloured suit or afternoon dress teamed with a fashionable hat made a smart outfit that could be assembled quickly if the wedding was organised at short notice.

Afterwards, wedding customs were influenced by the marriages of King George and Queen Mary’s daughter Princess Mary, to Viscount Lascelles in 1922 and of their son, Prince Albert, to Lady Elizabeth Bowes-Lyon in 1923. These lavish occasions and the fairytale royal bridal gowns of ivory and silver inspired a new generation, reviving the sense of romance that had been absent from wartime weddings. Affluent 1920s brides chose delicate frocks in cream, ivory or pastel shades, especially mauve, blush pink, peach and lemon, the finest fashioned from silk and chiffon and embellished with embroidery, lace, pearls and beading. Whether a dress or a fashionable suit was worn, it followed regular afternoon length, so as hemlines fell, rose and dipped again throughout the decade, so bridal wear fluctuated between calf-length to just below the knee. Headwear varied from conventional veils to bandeaux and cloche hats but was always worn low over the forehead. During the 1930s bridal wear acquired a new glamour, influenced by Hollywood movies. Graceful dresses of plain silk, satin or artificial silk (rayon) fabric might incorporate panels or trimmings of silver lamé and were expertly bias-cut to achieve a soft, figure-hugging drape. They could either be calf-length or evening length, sweeping the floor with a long train. The medieval style, inspired by historical epic films, was popular, as expressed in slender gowns featuring narrow pointed sleeves and round ‘Juliet’ caps, while an alternative vogue existed for summery floral ‘garden party’ dresses with a matching jacket or ‘coatee’ and teamed with a wide-brimmed hat. By the late-1930s long trained gowns in a cold white satin, sometimes woven in a damask-like flower pattern (‘bridal satin’) had largely replaced the soft ivories and creams of earlier decades, and such wedding dresses were quite definitely ‘special’, not intended to be worn again for any other occasion.

Throughout the Second World War (1939-45), when clothing and materials were scarce, late-1930s gowns were often re-worn. Initially white weddings were common but after clothes rationing began in 1941, pre-war gowns were borrowed or families pooled their coupons to buy a new white dress or the material to make one. New wedding gowns generally followed austerity specifications and featured narrow or slightly flared skirts without trains, although long veils were often borrowed. However as wartime shortages became more acute, few families had the resources for a white wedding: consequently many wartime brides were married in a sharp knee-length Utility-style suit or dress, accessorised with a simple floral corsage, glamorous waved hairstyle and stylish tilted hat. After the war, regular tailored dresses and suits remained popular with brides although by the late 1940s the extravagant New Look silhouette, with its cinched waist and flared skirt, was beginning to influence bridal styles and would shape wedding fashions during the 1950s. 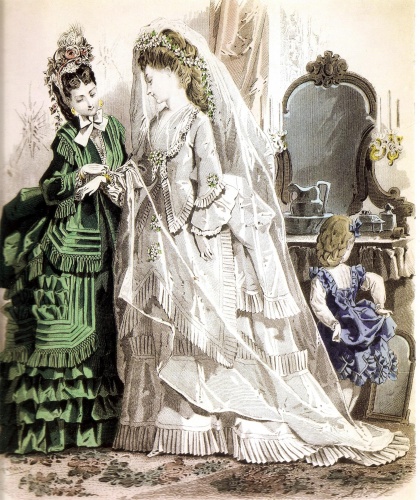 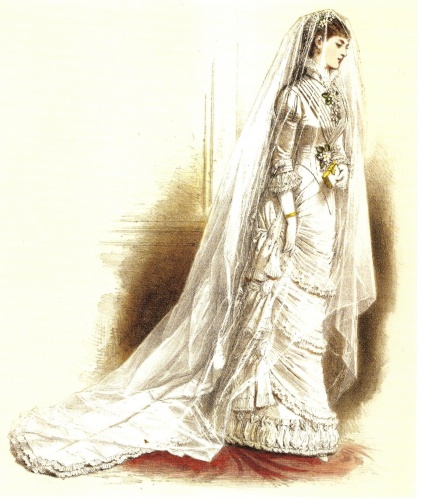 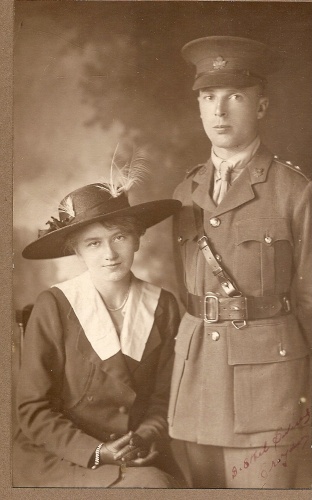