Brighton and Hove Celebrate the Coronation of King Edward VII 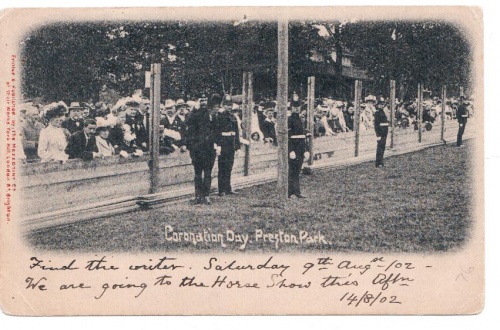 Edward VII (aka Albert Edward Saxe-Coburg-Gotha; 9th November 1841 – 6th May 1910) was a very popular character. During his many years as heir apparent he built a colourful reputation for himself, not least as arbiter of men’s fashion and as a man with a large appetite for wine, women and song – well perhaps not so much song as food! He was, in fact, responsible for introducing the practice of eating roast beef, roast potatoes, horseradish sauce and Yorkshire pudding on Sundays. For that alone I like him, as did the people of Brighton and Hove who felt they had a special bond with this charismatic Royal.

When Edward’s long wait to take the throne came to an end, with the death of his mother, Queen Victoria, on 22nd January 1901, the town set about making lavish plans, described variously as “splendid”, “enchanting” and “magnificent” to demonstrate their loyalty and celebrate his crowning.

The coronation was scheduled for 26th June 1902, but on the 24th it was announced that the King was suffering from appendicitis. Edward strongly opposed the idea of going into hospital, “I have a coronation on hand”, he protested, but Royal Surgeon Sir Frederick Treves (now famous for his friendship with Joseph Merrick, The Elephant Man) reportedly told the King, “‘It will be a funeral, if you don’t have the operation” (presumably adding “Sir” at the end of the statement). Treves won the day and performed the then-radical procedure of draining the infected appendix through a small incision. At this time appendicitis was generally not treated by surgery and carried a high mortality rate, but the King survived and within a fortnight was pronounced out of danger. Soon afterwards it was decided to hold the postponed coronation service on 9th August in Westminster Abbey.

Brighton and Hove revived their plans and determinedly set about celebrating the crowning of their King and rejoicing at the preservation of his life. Coronation day started with a service in the Dome; then at 11.30 a.m. a military parade and Feu de Joie (French: ‘fire of joy’ - a rifle salute) in Preston Park; 1.00 p.m. regatta; 2.30 p.m. aquatic sports on the West Pier, military and cycling sports in Preston Park; 5.30 p.m. the Mayor (Alderman Stafford) planted two trees in the Victoria Gardens; 6.30 p.m. carnival procession starting from the Aquarium; 8.30 p.m. grand illuminations of the Royal Pavilion and grounds, the Old Steine and other public buildings and spaces; finally a firework display along the sea wall.

The Brighton Herald for the day contained two full pages of events coverage, listing in detail all that was planned for individual roads and areas, for example, Barclays on London Road had illuminated the front of their bank with a crown flanked with the letters E and R all in fairy lamps of different colours. On the London Road the Brighton and Preston Constitutional Club had a very lavish display including a portrait of the King and Queen, lights, trophies and flags. St Bartholomew’s Clergy House was crowned with the King’s monogram with the letters picked out with electric light. No expense seems to have been spared by the town in their show of what the paper called, “fitting gladsomeness and gratitude”.

Reassuringly, the inmates of Brighton’s Workhouse were not left out of the day. There was extra “good” food served and a programme of amusements which included among many other fun things a facial contortions competition and a washing competition!

The scene in Preston Park was captured by the Mezzotint Company, a major Brighton publisher of collotype postcards with a printing works close-by, at the junction of London Road and York Hill. This enterprising company photographed the crowd, presumably section by section, and within days of the coronation had postcards on sale. One such card was purchased by Major Edward George MacDougall Brodrick (retired) and posted by him on 14th August. He wrote under the picture, “Find the writer”. Unfortunately we can’t, not even his great-granddaughter Sheila Brodrick Skinner, who gave us this postcard, can identify him in the crowd. We do, however, know that the Major posted the card in the Victorian wall post box outside his house at 35 Springfield Road. The house no longer stands, but the post box is still there and is still in use.

We are good at partying in Brighton, but the town’s 1902 coronation celebrations, albeit delayed, were really something. The main illuminations were spectacular and caused one rather awestruck man, standing outside Hannington’s during the evening show, to proclaim, “It lit up the town as if it were noon”. This was Brighton and Hove’s way of rejoicing for a much loved King who had very nearly not made it, in more ways than one.