A new greenway has recently been planted near Brighton Railway Station. It is currently in its maintenance period, before being formally opened to the public later this year. The area has been designated a Site of Nature Conservation Interest (SNCI) and forms part of the approved Masterplan for the Brighton Station Site. It is located to the rear of One Brighton and the Clarenden Centre and the traffic-free path will take in the New England Road Grade II listed bridge. Seating has been placed along the greenway, together with an art installation designed to reflect the site’s Victorian railway heritage (a rocket style steam train I believe).

Another recent change to railway property that I really like is the illumination of the London Road viaduct. At first glance this might appear a controversial decision in these days when we should be watching our carbon footprint, but according to the Council and the Railway Heritage Trust who fund the project, the coloured lighting uses only as much power as one traditional street lamp. It is a great idea to draw people’s attention to this magnificent feat of Victorian engineering. Of course, driving around the busy one-way system you would be unwise to take your eyes off the road to gaze upwards, but if you walk along this section of London Road, even if you are not wearing an anorak and carrying a clipboard, you cannot help but be impressed by this structure.

Can you imagine the impact it must have had when it was first built? Its brickwork not yet grimed by traffic fumes and bird poo, with its curves unobstructed by the dense terraced housing that has surrounded it since the 1870s, the tall arches appearing to stride across the open countryside and green, tree covered slopes of Preston valley. But before I get too carried away with the rural idle and imagery of a romantic and classical landscape we should remember that this brick railway viaduct was the product of an industrial era, with the railway marking the beginning of the modern age for Brighton.

Conceived and built to carry the railway line out of Brighton to Lewes, the London Road viaduct is 1,200 feet (370 m) long and reaches a maximum height of 67 feet (20 m) above the valley floor. It consists of one central elliptical arch and 26 other semicircular arches. Approximately ten million red and brown bricks with yellow brick dressings were used in the construction. The work was carried out by large teams of Irish navigators, who were described by Clifford Musgrave in his book Life in Brighton (1970) as “rough, uncouth and addicted to drinking and fighting at weekends”, they were nevertheless “fiercely dedicated to their work of building the railways and took pride in their ability to work harder than two or three ordinary labourers.”

The viaduct was built to the designs of locomotive engineer and railway architect John Urpeth Raistrick and completed by the hard working ‘navvies’ in 1846, having taken just 10 months. This superb achievement did, however, have its critics with Raistrick facing opposition right from the start over his choice of a viaduct. Local opinion favoured an embankment on the grounds of not only cost, but also safety. Opponents believed that an embankment was less likely to be blown up by enemy action. It was only 30 years after the Battle of Waterloo and fears of an invasion by the French had obviously not gone away.

Almost 100 years later it might have looked as if these fears were partly justified when, in May 1943, 25 German Focke Wolfe aircraft dropped bombs on Brighton, five of which landed on the railway. One demolished two arches and one pier at the west end of the viaduct, two arches west of the Preston Road span, leaving the tracks suspended in mid air. Driven on by wartime urgency, emergency repairs were carried out with incredible speed and trains started to use the viaduct again within 24 hours. In less than a month temporary supports put the viaduct back into commission while the brickwork was rebuilt. The replacement brick pier and arches can be identified today as the wartime reconstruction used blue brick, which is darker than that of the main structure.

London Road viaduct is one of 70 Grade II*-listed buildings and structures in the city of Brighton and Hove. It remains in constant use with 174 scheduled passenger trains (87 eastbound and 87 westbound) crossing the viaduct each weekday. Much has been written about its architectural brilliance - the dimensions of its arches and piers, its balustrade, stone balusters and semi-circular soffitts and if this interests you I urge you to find out more. For me, I am happy to just wonder at the immense efficiency, vision and can-do attitude of Victorian builders and architects.

Photos reproduced with the kind permission of The Royal Pavilion and Museums, Brighton and Hove 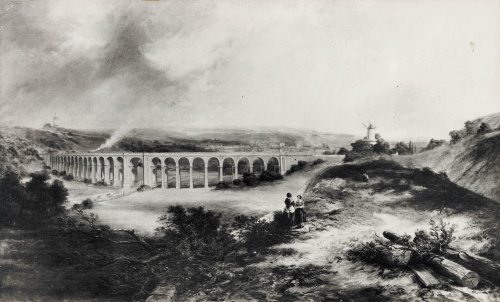 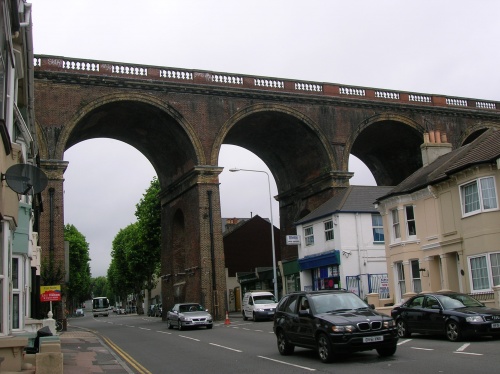