Fun in the Water Aquatic Entertainers 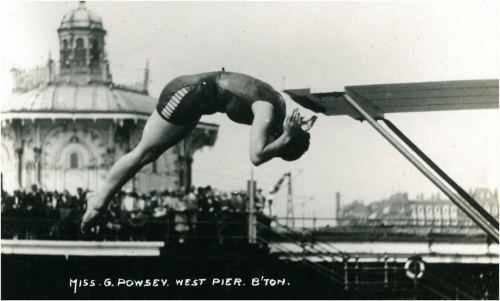 Caught up in the excitement surrounding the Olympics, I went down to the beach to watch the opening ceremony and, while the stream of teams from countries I had never heard of ambled across the Big Screen, I gazed out along the shoreline to the poor old West Pier and the site of the new i360. With construction now scheduled for the autumn 2012 it does seem that this really is going to happen. The West Pier Trust have said that they are delighted and have described the i360 as a “vertical pier” and a “worthy successor to Eugenius Birch’s masterpiece, the West Pier”. Instead of walking out over the sea as the Victorians did, we Elizabethans will rise 150 metres in the air to admire the panoramic views.

Promenading, accompanied by that great life skill of seeing and being seen, was the main function of the pier when it opened on 6 October 1866. Later, in the 1890s, it transformed from a promenading pier to a pleasure pier, designed to entice visitors and entertain holiday-makers with the complete seaside experience. This experience extended to the watery elements, not just paddle steamer excursions, but all manner of aquatic sports and entertainments. Exploits of derring-do made more spectacular because the majority of visitors in the mid-19th century did not swim; in fact most did little more than paddle and, if they did venture out, they clung onto ropes tethered to bathing machines at the water’s edge.

From the beginning, Brighton Swimming Club was associated with the West Pier, drawing large crowds to watch their races, competitions and their members perform feats of physical prowess and stamina. They were famous for their aquatic tea parties, staged on a wooden raft near the pier; “Captain Camp”, the one-legged swimmer who prepared and ate his breakfast on the water; and another member who performed lively airs upon his concertina and read the newspaper whilst lying on the water.

Most of these slightly bizarre entertainments were executed by men and boys, but there were a few women involved. Miss Louie Webb is a great example. She managed to transfer her under-water skills onto the pier with a performance in a glass tank situated in one of the pier kiosks. Submerged in three feet of water, her hair flowing around her, Miss Webb performed a variety of acts including eating sponge cake, drinking milk from a bottle, sewing and writing on a slate. The 1889 poster, advertising her three times daily shows, proclaims her performance as “unique, scientific, and graceful” and suggests that “every lady should see this wonderful entertainment”. By the turn of the century there was a new breed of professional, aquatic entertainer on the West Pier who introduced an even stronger element of theatre and comedy. Fred Gray, in his book The West Pier Story, gives a wonderful account of them all, including the divers Professor Reddish and Professor Cyril. Professor Cyril (real name Albert Huggins Heppell), was particularly notable because in May 1912 he made the ultimate showbiz sacrifice. Billed as “the great exponent of High, Swedish and Fancy Diving”, Cyril was killed when attempting his sensational bicycle dive - he slipped and was thrown heavily onto the deck of the pier, fracturing his skull. Walter Tong, Zoe Brigden and Gladys Powsey must also be mentioned. Tong was described by contemporaries as a “high and fancy diver and ornamental swimmer” and immediately before the First World War he developed a specialty act that featured something called the “Moleberg” and a 50-foot dive. Brigden was a Brighton girl, who lived in Mighell Street and was the town’s amateur swimming champion, turning professional in 1913. Between 1915 and 1924 she was famous for performing dare-devil diving exhibitions and a unique “wooden soldier” dive, which involved her plunging head first into the sea with her arms straight by her sides. (She gave up diving in 1925 and opened a hairdressers in Whitehawk.) Powsey was clearly an enterprising young woman and often appeared wearing a costume with the words “Bovril” across the chest - big companies using sports personalities to advertise their wares really is nothing new! Aside from her commercial success, Powsey did a very good imitation of a seal swimming, diving and calling out.

The last famous West Pier aquatic entertainer was the Great Omani, aka Ron Cunningham, who, during the 1960s, performed breathtaking feats of underwater escapology. These included the “death dive” based on an original Houdini show that had him jumping into the sea from the pier, head hooded, bound and padlocked, and the “fire dive”. For the fire dive, an assistant threw half a bucket of petrol onto the sea, set it alight and then the Great Omani, wrapped in chains, jumped through the flames. By all accounts a visually spectacular stunt, especially when performed at dusk with the flames fanned out over the water.

It is doubtful that the i360 will provide such ingenious entertainments, but I’ll be happy to step board and take the ride. My thanks to Fred Gray, honorary historian, the Brighton West Pier Trust, www.westpier.co.uk 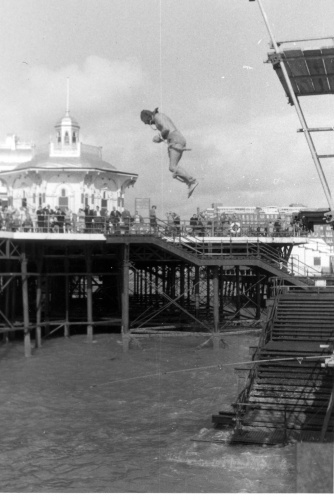 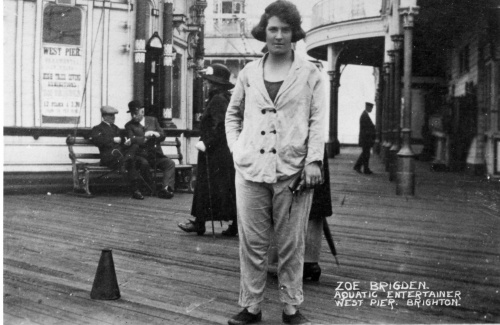