A History of Brighton Trams Part 2 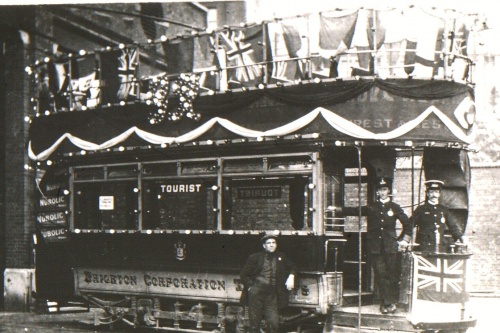 I am very grateful that the first article was so well received, so here is a little more on the Brighton trams. I will explain the types of trams that Brighton ran, journey times and frequency and also what is left of the tramways today. Brighton corporation started and continued with a basic open topped 4-wheeler tram. As mentioned before, the narrow gauge of 3 foot and 6 inches did cause design limitations, but there were 6 distinct types, lettered A to F. I am also including inside shots of an F class tram to give you an idea of what it was like to encounter one of theses modern marvels! Please remember, a tram is double ended, two sets of stairs, drivers controls, etc.

Round journey times for each route (Please note they always went to the Old Steine), were as follows,

The first thirty-five were built by the Milnes for the corporation and were the first trams delivered to Brighton, the rest of the class were built by the United electric company. They were open top, open ended four-wheeler cars with two 30 horse power motors, mounted on Peckham, Brush or Brill trucks. They were all fitted with mechanical wheel and track brakes. The track brake was a block of wood which pushed down on to the rail. Destination screens gave a single word route name and most of the trams carried route letters on the side of the car, this was stopped when the F class had side roller destination blinds fitted.

The corporation had found that the outside contractors had not always built sturdy cars, so the decision was taken to build all the tram bodies at Lewes Road, a practice that continued from 1914 until 1937.The B class were the first Brighton built trams and were similar to the A class, except later on in service, the wooden seats downstairs were replace with upholstered ones! The trucks were all the famous Brill 21e (The Ford Escort of tram trucks), as the other types had found Brighton too tough on them.

The first trams to have the fronts glazed, which was a lot kinder on the driver and standing passengers, they also had upholstered lower seats as well, such luxury! The destination boards on each end were a lot bigger with more detail.

Similar to the class C, but slightly wider bodies and the wheel brakes were now air powered and did not rely on the muscle power of the driver. Upholstered lower seats as standard, which were sometimes arranged across the floor as opposed to the underground type long bench seat. They also had more powerful 40 hp motors

Similar to the D class, they had air brakes and roller bearings as standard, as well as slightly smaller wheels. They were updated on a regular basis and ended up looking very similar to the F class.

The last and most modern design. They had 50hp motors and air brakes for both wheel and track, Dunlopillo lower seating, deeper upstairs panels for more shelter and a hexagonal end which were inspired by the Glasgow standard cars. 31 cars were built and 53 along with 52 and 51 were the last trams built by the Corporation in 1937. These trams reverted to the long bench seats, with a single swivel chair each end. The experiments with seats across the floor had proved popular with the public, but had increased loading times There was also a works car, number1 built in 1914, which was originally a snow broom car, but became the works car. After 53, this will be the next Brighton tram to be restored. She was rescued from a garden in Brighton where she had been a shed since 1939!.

What is left today? The most obvious items are the old wooden shelters that you can see at Queens Park Road, Ditchling |Road and Dyke Road. The Lewes Road depot is till there, the offices are now a music studio, but the bus depot behind is the old tram shed with some rails in the floor, some original machinery and a lifting gantry made out of tram rails, it is big! A lot of the rails were lifted for scrap, or removed after the war, but I have been told there are still some under the roads. We have an original pair on site by 53. The trolley poles were all replaced by newer trolley bus poles, the only survivor is lying in the grass at Amberley.

As mentioned in the first article the good news is that 53 is within two years of being finished and tram 1, the little works car is next in the queue after that. Why not join us and ensure the future of these two trams? Work parties are every week, or you can help on the stall at shows. There will be open days later in the year, please contact us at tram53project@yahoo.com.