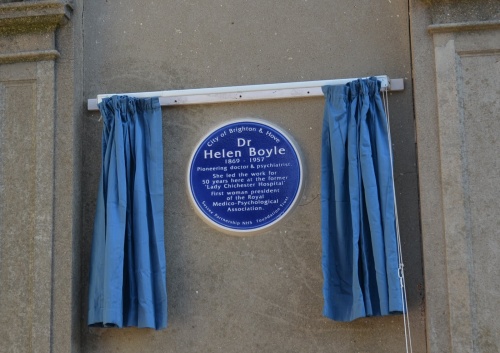 The Mayor of Brighton unveiled the plaque dedicated to Dr Helen Boyle at Sussex Partnership NHS Foundation Trust’s Aldrington House on New Church Road, Hove. Members of the Boyle family were present at the ceremony together with the Ambassador of Serbia, Dr Ognjen Pribićević.

“Insanity begins before a person is insane, and it is then that recognition and skilled treatment are most valuable”. Dr Helen Boyle.

A new blue plaque was unveiled in Brighton in September, dedicated to Dr Helen Boyle (1869-1957), and marking the place where she carried out ground-breaking work that changed the lives of countless working class women and girls in Brighton and Hove.

Dr Boyle’s pioneering treatment of patients, who were largely from the poorest backgrounds where grinding poverty; the too often repeated cycle of pregnancy and childbirth; and high levels of infant mortality led to depression and mental illness, was transformative. But despite this, not many people know about Dr Boyle today and her achievements are in danger of fading into the shadows.

Karen Braysher, from the Sussex Partnership NHS Foundation Trust, is, however, determined that this will not happen. She has carried out extensive research into Dr Boyle and successfully campaigned for the commemorative plaque on Aldrington House, in New Church Road, Hove. Karen said: “Dr Helen Boyle is an inspirational figure, not just for women but for anybody working to fight the stigma of mental health. She was a pioneer, tirelessly working to offer treatment to women with mental health issues at a time when the only option available was committal to an asylum, which sought to segregate people from the rest of society rather than help them…” Helen Boyle started life in Dublin in 1869. She trained at the London School of Medicine for Women from 1890 and qualified as a doctor in 1893. In 1894 she gained her M.D. in Brussels. While medical superintendent at Canning Town Mission Hospital in the East End she came face to face with conditions that both disturbed her and shaped the future direction of her career. She observed that nervous and mental disorders in their early stages were scarcely recognised by the medical profession and was shocked by conditions that forced London’s poorest, mostly women, to struggle on under great emotional stress. At that time, no general hospital would accept patients with neurosis; and until such time as they had become so disturbed they were certifiable, no mental hospital would either. “I saw mental patients ... neglected and maltreated until after days, months or years ... they were turned into the finished product – lunatics – and were certified.”
It became Dr Boyle’s mission to improve the treatment of women with early-stage mental illness, from depression to borderline insanity – conditions exacerbated in a great many cases by inadequate living conditions, malnutrition and exhaustion.

“I saw the impecunious and harassed mother of five... with a nervous breakdown after influenza…apply for treatment, wait many weary hours, and get a bottle and the advice not to worry…No hospital would take her because she had no organic disease; no asylum because she was not certified.”

First she moved to Hove and, along with Dr Mabel Jones, set up a General Practice at 3 Palmeira Terrace, 37 Church Road; together they became the first women doctors in Brighton. Soon though, Dr Boyle was devoting the majority of her time to the Lewes Road Dispensary for Women and Children in Islingword Road – the first and only dispensary of its kind in Brighton to offer free or low-cost treatment to women who could not afford normal GP’s charges. Imagine the relief women must have felt in finding this sympathetic, female-only environment, but also the scorn Dr Boyle must have encountered from the male dominated medical profession, with its asylums and Poor Law institutions.

Regardless of opposition, the venture was a huge success and, in 1905, led to the opening of ten beds for the treatment of in-patients at 101 Roundhill Crescent. Dr Boyle recognised that, “If anyone needs an entire change of life and surroundings in order to get better surely it is the poor”. The work rapidly grew and, in 1911, a lease was taken out on 70 Brunswick Place, Hove, making it possible to admit a total of 38 in-patients. In 1920, a large house in New Church Road was purchased as premises for the Lady Chichester Hospital for Women and Children with Nervous Diseases.

The Lady Chichester was the first of its kind in England for the treatment of nervous disorders. The main basis of treatment was electrical therapy, hydrotherapy, massage, relaxation, psychotherapy, and “the full benefit of Brighton sunshine and sea breezes” all within a supportive environment. There was no “red tape”; women were treated by women and medical supervision was done by experienced people who knew what they were doing – all revolutionary concepts. Dr Boyle continued her work at the Lady Chichester until the NHS took over in 1948. (The building remained a working hospital until 1988. It now houses corporate offices for Sussex Partnership.) She was the first woman president of the Medico-Psychological Association (now the Royal College of Psychiatrists), the first female consultant psychiatrist at the Royal Sussex County Hospital, and co-founder of MIND.

Her remarkable career also included time spent working in Serbia with the Royal Free Hospital Unit during World War One and, in recognition of this war service, the Ambassador of Serbia, Dr Ognjen Pribićević, was among the guests at the unveiling of her commemorative plaque on the 7th September.

Dr Boyle lived the last years of her life with her companion, Marguerite du Pre Gore Lindsay, in a cottage in Pyecombe. She died in 1957, one day after her 88th birthday.

Her work into the treatment of working class women and girls, including the unique in-patient facilities she established, achieved worldwide recognition. By gaining acceptance that mental illness could be identified and treated before it became so bad that certification was required, she saved countless women from the nightmare of committal to the asylum.

Note: My thanks to Karen Braysher, Governor Brighton & Hove Sussex Partnership NHS Foundation Trust, for her help and permission to use the following images. 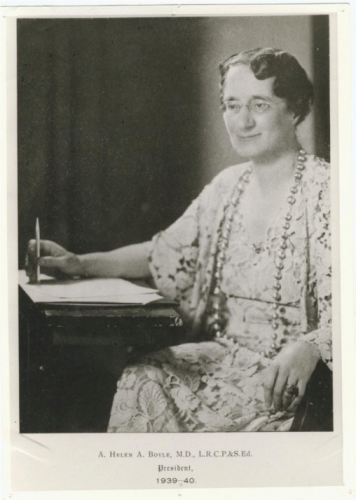 Dr Helen Boyle. Her work challenged the lunacy laws and set out to establish a holistic system of care for recoverable conditions outside of the asylum system. 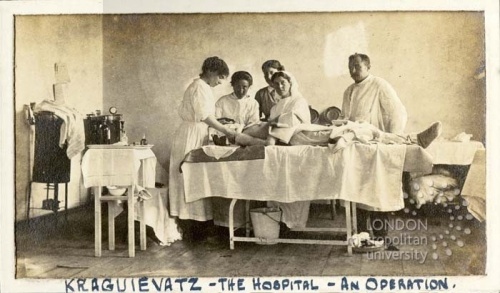 In 1915 Helen Boyle saw active service as a doctor in Serbia and was made a member of the Order of St Sava by King Alexander of Serbia. 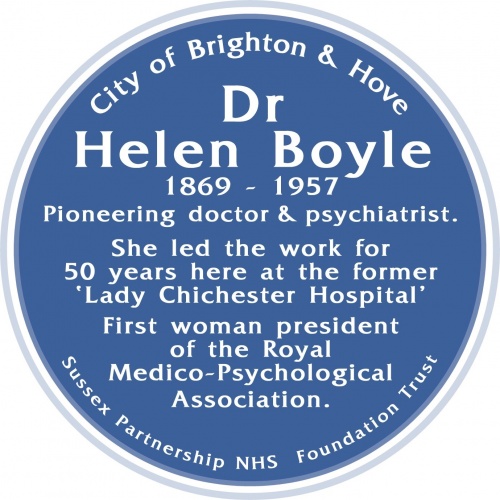 Aldrington House now houses corporate offices for Sussex Partnership. Karen Braysher, along with other governors, would like to see it changed into a ''Community Half Way House'' for those with mental health conditions who need short term and out-patient care.