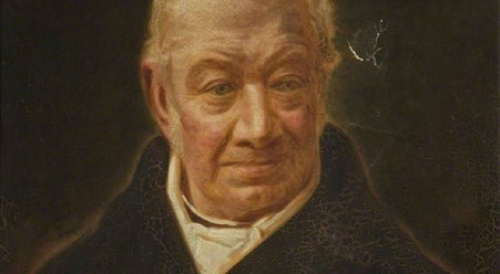 ©University of Central Lancashire. Joseph Livesey promoted complete abstinence from alcohol, he was revered by reformers as “the father of teetotalism”. The word “teetotal” is said to have been first used at a Temperance Society meeting in 1833.

I read recently that the UK’s drinking habits are changing. Of course, this is related to Covid-19 restrictions, the closure of pubs and the move to home drinking, but it is also connected to the rise in non-alcoholic alternatives. It seems that more people, young and old, are developing a taste for booze-free beverages. Even in our house, for decades an outpost for Harvey’s Brewery, the odd bottle of Elderflower Pressé has made an appearance! Although, to be fair, the UK’s drinking culture and history of alcohol consumption has always been one of fluctuation and change.

In 1800, Brighton had one inn for every thirty houses and by the late 19th century, as well as hundreds of pubic and beer houses, Brighton had more than ten sizeable breweries. Visiting the pub had become the most popular form of leisure activity amongst working people. Even the smallest street in Brighton had several pubs. However, between 1900 and 1935 the number of licensed houses in the town dropped from 700 to 479, a decline brought about by World War One (with legislation that introduced shorter opening hours, higher duties on beer, and significant reductions in both the production and strength of beer) and the economic depression of the 20s/30s. Another big influence on attitudes to drinking was the temperance movement.

Early temperance reformers did not condemn drinking per say, their aim was to abolish excessive use of distilled spirits and drunkenness, not, heaven forbid, social drinking. But in the late nineteenth and early twentieth centuries growing concern about the adverse effects of alcohol caused attitudes to change. Well organised temperance societies became increasingly influential, they renounced the use of all intoxicating beverages and blamed alcohol for all manner of social ills.

The teetotal dominated movement wanted to control drinking by legislation but realised that urging individuals to abstinence by personal choice, not the coercion of law, was probably going to be more effective. So, they set about disseminating their temperance message through public meetings and events, but even more powerfully through periodicals, tracts and associated images. The growth in literacy brought an increase in audiences and advances in technology meant that reformers could produce volumes of, essentially propogandist, material for distribution to the masses.

Representations of “the road to ruin” were very influential, especially when employed alongside the myth that a single alcoholic drink led inevitably to alcoholism. Material was published that appealed to readers’ desire for the sensational and the dramatic – how the signing of a teetotal pledge redeemed the drunkard from his squalid life; a life in which he spent his wages on drink and left his children to starve.

Drinking was presented as contrary to God’s intention for humanity and much ingenuity was devoted to explaining that Jesus had not turned water into intoxicating wine at Cana but produced a miraculous non-alcoholic version!

Economic self-interest and a desire for good health also made persuasive arguments, as did morality with emphasis on qualities such as honour, prudence and piety. The moralistic rhetoric was ramped up even further during WW1; intemperance, it was stated, harmed the nation. David Lloyd George, in a speech to the Shipbuilding Employers Federation in March 1915, declared, “We are fighting Germany, Austria and drink, and so far as I can see the greatest of those three deadly foes is drink”. Such proselytizing could be viewed as a middle-class attempt to ensure socially acceptable behaviour by the working classes but, in fact, the teetotal movement struck a chord with large numbers of working people, not least because it suggested that personal salvation and social transformation were within their grasp.

Many in Brighton were inspired by the message of teetotal temperance, deserting the town’s watering holes and pledging to abstain “from all liquors of an intoxicating quality, whether ale, porter, wine or ardent spirits, except as medicine”. In 1868 the Brighton branch of the Sons of Temperance was established and in 1882 a youth section, Cadets of Temperance, was set up. By the 1900s, the Sons of Temperance had opened a convalescent home near Queen’s Park and provided members with life assurance, sick pay and extra money during times of unemployment.

Brighton’s children were also recruited for the fight against the evils of the “demon drink”. Under the banner of the Band of Hope (temperance organisation for children) children as young as six came together weekly in halls around the town, like the one at the Free Christian Church (now Brighton Unitarian) in New Road, to hear lectures, sing and play music.

The children also participated in events and demonstrations. One such demonstration took place in 1913 along Marine Parade. Amazingly, it was filmed (view via https://screenarchive.brighton.ac.uk/detail/32/) so we can see for ourselves what a well-attended affair it was. Many demonstrators carried embroidered banners; one read ‘Clermont Band of Hope’. Young boys wore uniforms and carried replica rifles, the girls all wore white dresses and carried flowers. A large group of children carried a long framework covered with flowers: the ‘Garden of Temperance’. Crowds lined the seafront, many with horse-drawn carts adorned with banners denouncing the drinking of alcohol.

These advocates of the temperance movement believed that it was not only a good idea for them personally, but that it had far reaching consequences and benefits for British society. Numerous local charities and organisations were established to improve the moral welfare of Brighton’s “tipplers, drunkards and backsliders” and, of course, there were the churches with ministers of every denomination embracing temperance. In 1917, Mayor Alderman Herbert Carden congratulated the Carlton Hill Mission for its temperance work in the Carlton Hill area saying, “If there is any district in the town needing such work, that is the district”. Bristol Road Methodist Church was also located in a “problem area”. Being close to the Kemp Town Brewery, Rev Lewis Court was able to observe ‘load after load of “ruined grain” of malt that had been converted into beer’ and used his pulpit to condemn ‘the wicked waste of foodstuffs going on in the manufacture of intoxicating drink’.

Alcohol consumption has been part of our lives since time immemorial and it will probably remain so. However, our approach to it has once again changed; reformers and policymakers now tackle alcohol abuse by encouraging moderation and awareness rather than outright abstinence. The message today is “drink responsibly” and alcohol-free drinks are clearly part of this. Cheers!

©George Cruikshank. 1847. “Fearful Quarrels and Brutal Violence are the Natural Consequences of the Frequent Use of the Bottle” 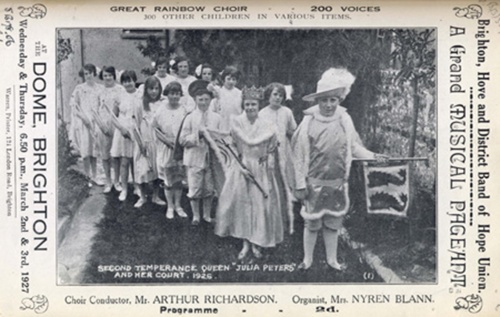 ©brightonmuseums.org.uk. Programme of 1927 Brighton, Hove and District Band of Hope Union’s Grand Musical Pageant. Brighton Museum and Art Gallery have a selection of programmes which relate to temperance events held at the Brighton Dome in the 1920s. 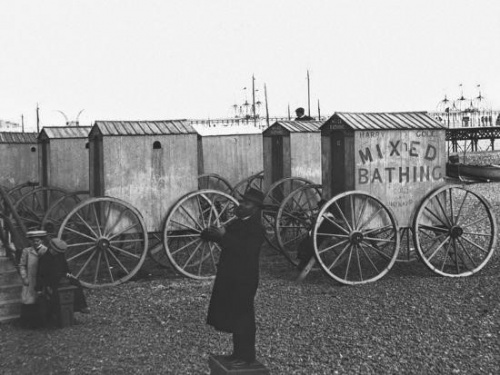 ©Art.com. Image of a Brighton beach preacher. One such preacher was W H Shoesmith. He liked to deliver sermons about temperance. However, he was not himself an abstainer and it is alleged that he spent money collected from his congregants after each service in the Norfolk Shades or one of the many pubs up Southover Street.

The Band of Hope, renamed Hope UK in 1995, is the most successful temperance organisation. It has played a large part in the lives of generations of children and endures to this day.