The Popular Figure of the 18th Century Gentleman Smuggler 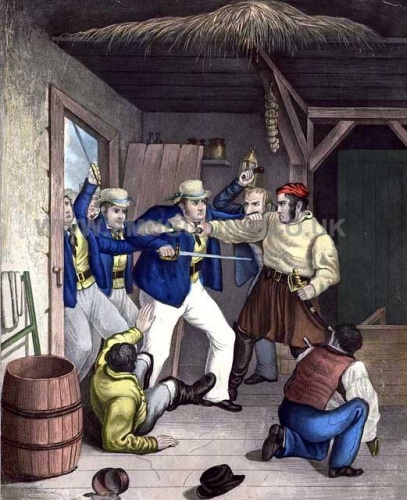 Last month all our thoughts were turned to where we were going to purchase the “little extras” we wanted for the festivities. We were on the look out for signs that a bottle of gin was cheaper in Asda than Sainsburys. Now, with Christmas over, we have the additional incentive to buy goods at “sale” prices to help counter the effects of Mr Osborne’s VAT increase.

The wish to acquire the finer things in life whilst paying as little as possible, is not a new concept for someone living in Brighton. Indeed, in the 18th century there were shops on the Steine that deliberately set out to fulfil this desire. These establishments opened around 1767 and, from the outset, were very popular with Brightonians who came to purchase toys, china, lace, millinery ribbons, muslins, chintz and tea. The shops’ success lay, not so much in the range of their goods, but in the way the proprietors skilfully conveyed the notion that stock was being sold at much less than real value, because it was “smuggled”. A suggestion that may well have been true. Smuggling was so prevalent a fashion at the time that people felt they were losing some of the best opportunities that life had to offer if they did not acquire at least some smuggled goods.

Today it is hard to imagine people risking fines and even imprisonment for a frippery like lace, but in the 18th century lace was a luxury much in demand by followers of fashion and to be able to buy it cheaply was a powerful inducement. Examples of the free-trade in lace include the day in 1776 when revenue officers were made suspicious by the firmness of the cushions inside a carriage coming into Brighton from Dieppe and found that they were stuffed with lace worth £1,000. On another occasion a Frenchman was caught on the Steine trying to sell bread loaves at very high prices and, when the loaves were broken open by the revenue officers, they were found to have lace fillings.

Even respectable people, like the Vicar of Preston church, were sometimes implicated in smuggling. At the time Preston and Hove were ecclesiastically conjoined, the service being conducted in each Parish on alternate Sundays. One Hove Sunday the Vicar turned up to do his duty, but found that the bell was not being rung and, on enquiring why, was told that he had got his preaching timetable wrong. The Vicar, certain that he was right, pressed the Sexton who eventually informed him that he could not carry out the service because the church was full of kegs of spirits and the pulpit was full of tea.

A church stuffed with tea and brandy seems daring enough, but the most admirable bit of smuggling opportunism took place in broad daylight on the afternoon of 19th July 1821. The Level was crowded with people enjoying George IV’s coronation sports. Everyone was there, including the excise men and, while the town celebrated, a band of free-traders assembled in the stable yard of the Old Ship Hotel. At a given signal, they brought up from a hiding-place on the beach a consignment of 30 kegs of Hollands Gin, on which duty had never been paid. The kegs were slung on to the backs of waiting horses and, taking advantage of the empty streets, the smugglers drove then swiftly away before anyone could realise what was happening.

The sport of smuggling was undoubtedly lucrative, but it was also extremely hazardous. A tombstone inscription in the churchyard at All Saints, Patcham tells the tale of a desperate encounter between the smuggler Daniel Scales and the customs men who shot him after he refused to surrender his booty.

OF DANIEL SCALES, WHO WAS UNFORTUNATELY SHOT ON THURSDAY EVENING, NOV. 7TH, 1796. Alas! swift flew the fatal lead, Which pierced through the young man’s head. He instant fell, resigned his breath, And closed his languid eyes in death. All you who do this stone draw near, Oh! pray let fall the pitying tear. From this sad instance may we all Prepare to meet Jehovah’s call.

If the revenue men were lucky they got the smugglers and confiscated their goods - like the time they found a large haul of spirits in the dovecote at Preston. An incident in 1794 did not, however, go so smoothly. On this occasion officers found a gang of smugglers landing 4-500 tubs of gin. They seized the cargo, but en route to the Shoreham customs house two of the soldiers tucked into the barrels. They drunk themselves insensible and were found comatose on the beach the following morning. One, who was due to be married that day, was quite literally dead drunk and never recovered.

Such over-indulgence brings us back to the wanting of goods that we can’t really afford at Christmas and actively seeking loss of income for the government in January. Unfortunately, supermarket sales and “knock-down” prices don’t conjure up the romantic feel of old-time smuggling, moonless nights, churchyards and dashing figures on horseback … but hey that’s progress! 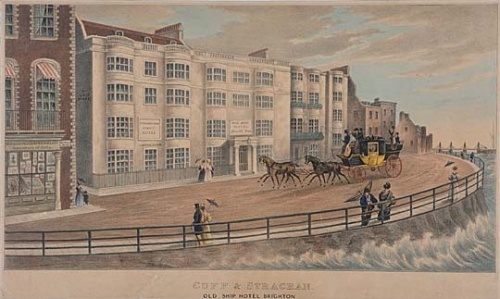 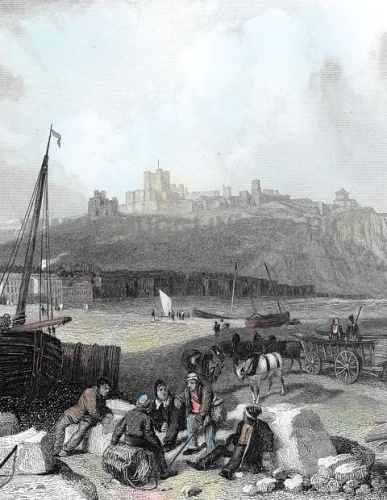 Villainous smugglers or innocent fishermen? When smuggling was at its height, they were one and the same. This 19th-century print shows Dover beach.