Scarlet and blue: a traditional uniform at Christmas 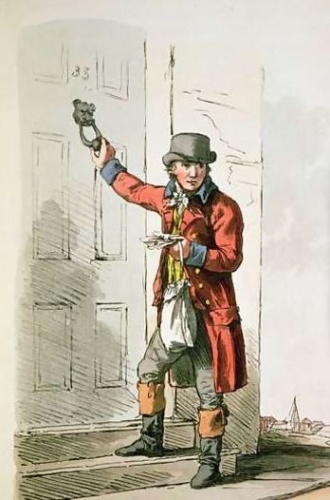 Ever since Georgian mail coaches thundered along turnpike roads and early letter carriers knocked on doors, postal workers have been familiar figures in our streets, wearing their distinctive blue and scarlet uniforms. Although sending festive cards by post is no longer the only method of conveying seasonal greetings, our local postmen/women will, as ever, be fulfilling an important role, delivering cards and parcels and helping to connect relatives and friends in these busy weeks leading up to Christmas.

Britain’s first organised postal service, formed in 1516, was exclusively for Government use, but in 1635 King Charles I opened up the Royal Mail to the general public. Early postal messengers were sometimes issued with special blue or red livery suits embroidered with the city’s armorial bearings, however when the British Postal Service became established in the eighteenth century, red was chosen for its servants, this being the royal colour of England and the Post Office having its origins in royal couriers. The mounted post boy of the Georgian era wore a knee-length red buttoned cloak or ‘rocket’ with a caped collar, a jacket, breeches, heavy riding boots and a felt hat, his accoutrements a whip and a post-horn. In 1784 the first mail coach was introduced, this horse-drawn system continuing until c.1843 when the railways completed their take-over of mail transport. A guard protected both the mail and the passengers travelling in the coach and he carried weapons comprising a cutlass, a brace of pistols and a blunderbuss, as well as a horn or bugle to warn other road users and toll-keepers of the fast-approaching conveyance, which had to observe strict timetables.

In 1793 the first official issue of standardised clothing was made for London General Post carriers, the drivers and guards of its mail coaches receiving gold-braided scarlet uniforms. Subsequently the Post Office supplied every London mail guard and driver with a scarlet cloth coat faced with blue lapels and linings, a blue waistcoat and a black felted beaver fur hat. Sometimes post boys acted as postillions to the mail coaches and rode the nearside horse of a pair, wearing an iron or stout leather guard strapped to their right leg as protection from the shaft and offside horse. Red-coated bellmen also walked the streets of towns in the late afternoon, before the departure of the mail coaches, ringing a bell and carrying a bag with a slit for the collection of letters not yet handed in at receiving post offices: this role was discontinued in the early Victorian era with the establishment of road-side pillar boxes and the introduction of the pre-paid penny post in 1840.

In 1772, the General Post Office had instigated an extensive network of letter-carriers to make a free house-to-house delivery on foot within the boundaries of each post town – the forerunners of our postman/woman. Like the mail coach teams, in 1793 they were issued with a smart uniform comprising scarlet cutaway coats with blue lapels and cuffs, the coat fastening with bright brass buttons inscribed with the wearer’s unique number. They also received blue woollen cloth waistcoats and beaver hats with a gold hat band and cockade, but had to supply their own breeches and, later, trousers. The adoption of standardised garments outside London was slow, however, and provincial letter carriers were not all issued with uniforms until the 1830s. There were also regional variations: for example, in 1837, London’s ‘Two Penny Postmen’ wore uniforms in reverse colours, the cutaway coat tailored in blue cloth faced with red.

Reflecting developments in the uniforms of other public servants, the postman’s uniform underwent significant changes during the Victorian era, the more colourful elements gradually disappearing in favour of a more sombre, business-like image. In 1855 a scarlet skirted frock coat replaced the old-fashioned tail coat, the carrier’s number now worn on the collar, while the traditional beaver hat gave way to a glazed top hat modelled on French postmen’s headwear. Waterproof capes were also issued to help protect the coat, but nonetheless bright red clothing was quickly spoiled in industrial towns and cities and in 1861 the regulation frock coat was changed to blue faced with scarlet collar and cuffs, the initials GPO being embroidered on the collar above the wearer’s number. Scarlet piping also edged the matching blue waistcoat and the outside seam of the winter blue trousers and grey summer trousers. The new glazed hat proving unsuitable, in 1862 a shako cap covered in blue cloth with red piping and a straight glazed peak was introduced. Finally, in 1868 a military-style dark blue tunic replaced the frock coat and waistcoat, this smart, functional uniform continuing until 1910.

By the early 1900s the Post Office was one of the largest employers world-wide and took its uniforms seriously. In 1910 the Committee on Uniforms declared six grades of ranked workers to be entitled to specific uniforms and this ended the distinctions between London and elsewhere. Those entitled to uniforms included post office staff and others such as doorkeepers, postmen and post women, porters and liftmen, mail cart drivers and telegram messengers. At around the same time the tunic-jacket was phased out and replaced by a more modern garment based on the civilian lounge jacket: the red collar was dropped but red piping continued and, although it took some years to be adopted countrywide, the new style continued until the late twentieth century.

Some women had worked as letter carriers since the 1700s, yet the first items of female uniform - a waterproof cape and tailored skirt - were only introduced in 1894. During the First World War when many females replaced male GPO employees away on military service, a full uniform of navy blue serge skirt, blue double-breasted coat and peaked cap or wide-brimmed felt hat was issued. Post women also received a police whistle for use in emergencies and stout boots for their rounds that one wearer described as ‘of a weight and of a fearsome rigidity that the foot accustomed to lighter shoes cannot easily endure.’ Further changes occurred to their uniform during the Second World War, when slouch hats became popular. Trousers were introduced to the post woman’s uniform in 1941, reinforcing the need for practical, comfortable clothes and setting a trend for the future. 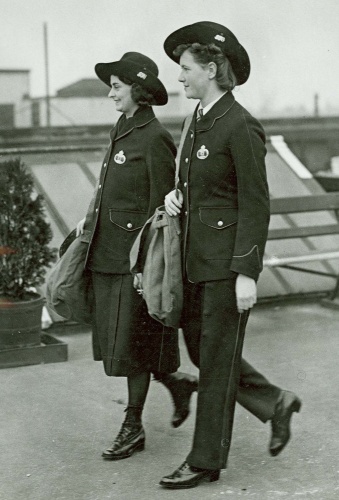