Walking in the Zoo 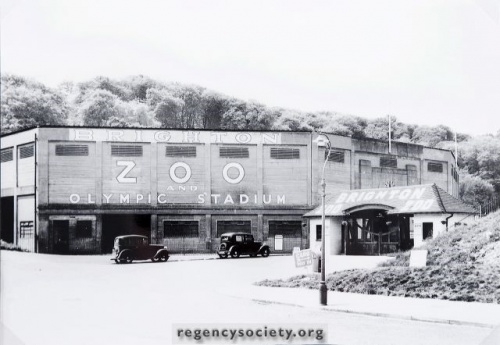 In 1870, music hall artist Alfred Vance had a “hit” singing about walking in the zoo on a Sunday. His song is noteworthy, because it is credited with bringing into popular usage the words “OK” and “zoo”. The abbreviation, zoo, had appeared in print before in around 1847, when it was used for the Clifton Zoo in Bristol, but did not catch on until Vance sang, the okay thing on Sunday is walking in the Zoo. Unsurprisingly, Fellows of the Zoological Society were not OK with the shortened form. Those associated with the very popular and successful London Zoo, in particular, preferred “zoological garden,” which in turn was short for “Gardens and Menagerie of the Zoological Society of London.”

Over time we have had menageries, zoological gardens and zoos in Brighton, but not all of them have been successful. Dr. Graham Rowe talks about a failed or very short-lived zoological gardens in Park Crescent, Brighton in the 1830s. The Times, on Friday 3rd June 1927, reported that a proposal to establish a zoo in Withdean, Brighton had been abandoned. And the private zoo owned by Mr Chapman at Withdean Hall can be traced through press coverage of problems experienced with animals from its collection escaping – never a good feature in a zoo!

Escapees included a young Himalayan bear, called Evelyn, who got under the wire in March 1928. The Times followed its trail and on 2nd April told readers that, “Cadets and Boy Scouts had been sent out to range over the countryside … looking for this wild animal.” Less dangerous was the red deer that escaped in August 1928 and was chased this time by a chauffeur, two gardeners and a housemaid through gardens in Varndean and Cirendon-Road [Surrenden, I am guessing].

In February 1935, another set of plans were put forward for a zoo in Withdean; this time with more success. Alderman Sir Herbert Carden’s proposal was part of a local improvement scheme which included botanical gardens, a big sports ground, three open air bathing pools and a zoo, “comparable with Whipsnade”. (The Times, 14th February 1935).

The sports complex opened in 1936, built on Marshall’s Playing Fields (used for many years by Brighton Grammar School’s and then Brighton Technical College and named after the school’s former headmaster, E J Marshall.) with the Lawn Tennis Association developing the site as the Sussex County Lawn Tennis Club. There was a centre court, an open seating area and grandstand with a capacity for 2,000 spectators, further tennis and squash courts. A large club house overlooked the venue, with a chauffeurs’ “rest hut” next door, which later became the Monkey House.

The outbreak of war in 1939 meant that the zoo and the tennis centre, which by this time was considered the finest outside Wimbledon, had to close. The zoo’s dangerous snakes were destroyed, presumably as a precaution against escape during aerial bombing, and the stadium became home to both a tank regiment and a mortuary.

On 22nd May 1947, Fred White and Denis Mitchell, joint lessees and entertainment promoters, re-opened the venue as the Brighton Olympic Stadium, with Sussex County Sportsmen’s Club and much expanded zoo. The Brighton Herald, 24th May 1947, reported that the Mayor had congratulated the two men for making, “such a notable addition to the town’s attractions.” Exactly what visitors could see is a little unclear, but there were pony and trap rides, sheep, geese and goats and certainly anecdotal evidence suggests more exotic animals, including a black panther and hyenas.

The attractions definitely improved in 1948 with a re-launch and opening by film star Jean Simmons. The two enterprising lessees having received approval to hold circuses and rodeos at the Olympic Stadium and to introduce to the zoo a birds’ paradise, pets’ corner and children’s play area. It was, in their words, a “kiddies’ paradise”. And for those not so keen on cuddly pets there was the small, passenger carrying railway with steam locomotive, installed by the Brighton & Hove Society of Model Engineers and used to transport visitors around the 25 acre site.

Another re-launch happened on Saturday 30 April 1949 with actress Jean Kent officially opening the Withdean Zoo. Brighton Herald covered the story and said that animals had been arriving throughout the week from zoological collections around the country. They confirmed that the zoo was home to, “two fine African lion cubs (10 months old), Russian and Himalayan bears and many other animals large and small, including 80 monkeys from various parts of the world, as well as 40 chattering parakeets”.

Brighton Argus on the same day called it, “the largest collection of animals on the south coast”. And, just in time for the opening, one of the zoo’s Australian Dingos gave birth to two puppies which were named “Brighton” and “Hove” respectively.

Into the 1950s, the zoo opened daily, including on Sundays for those wishing to follow Vance’s advice - the okay thing to do on Sunday afternoon is to toddle in the Zoo - and continued to have what a contemporary bus company advertisement called a, “representative selection of animals and birds to amuse and delight the visitor”. Unfortunately, the enterprise never really prospered and was closed in 1952. Perhaps it was just too much of an odd mix of delights, even for Brighton. 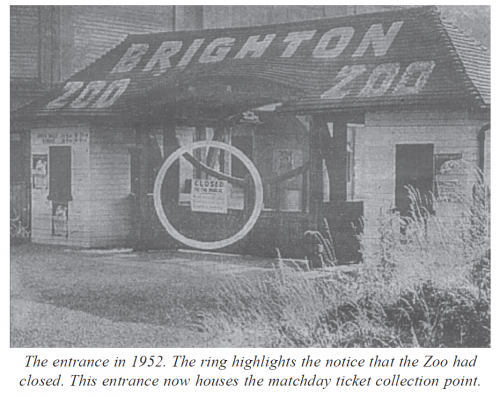 Image courtesy Brighton & Hove Albion Collectors’ and Historians’ Society. The zoo closed in 1952. In 1999 the Albion moved to the Withdean Stadium and this entrance became the matchday ticket collection point - “Seagulls in a Zoo” as an article written for the Albion Newsletter put it! (Albion moved to the American Express Community Stadium in 2011.)